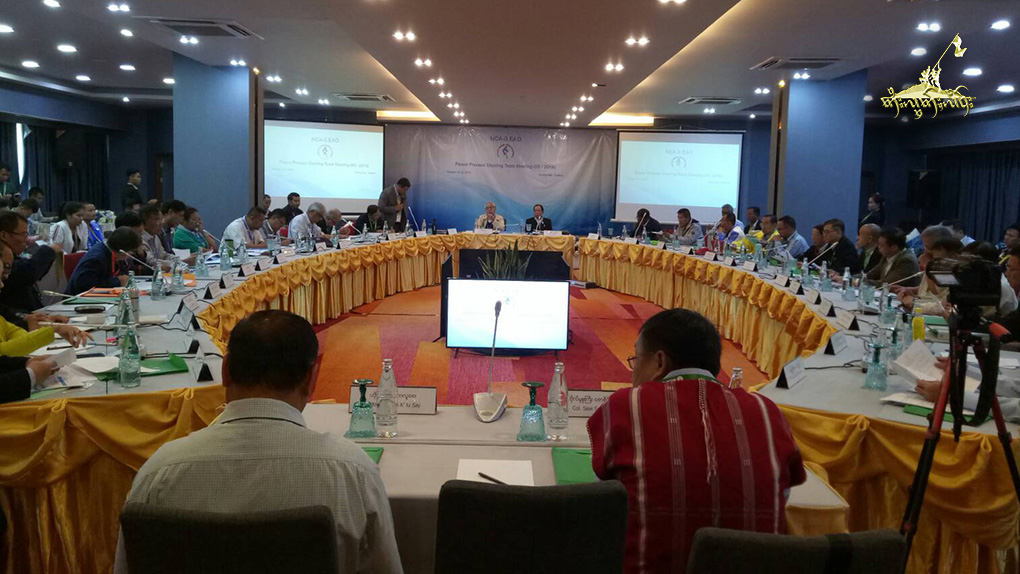 Greetings to the leaders who attending the PPST meeting. It is a great pleasure and honor for me to have the opportunity to deliver the opening speech as Acting Team Leader in this meeting.

Aiming to restore and tread the right path of the peace process; to be able to continue formal negotiations and political dialogues; to convene the fourth 21st Panglong Conference in 2020; and to establish a Federal Union, in order to overcome the current stalemates, we will have to discuss matters concerning the meeting between the government negotiation team and NCA-S EAOs; the results of the informal meetings between representatives of NCA-S EAOs and representatives of the government during Europe trip; to hold the fourth anniversary of signing NCA; and other matters that are important to the peace process and strive to find answers in this meeting. During the discussions, we must be patient and together (concertedly) strive to get appropriate results that brings equal benefits for all.

In planning for the future process, it is necessary to try our best to make it all inclusive. The process that will be laid down in relevant with the political, military, peace and international situations. Since there will be general elections in 2020, basic principles for the peace process and the establishment of federal union have to be agreed in the 21st Panglong Conference prior to the elections. Only then, the road to the establishment of the peace process and the Federal Union will be straightforward and smooth after 2020.

In order to reach our goal, the existing unity among us is crucial. It is necessary to make our unity stronger and more and more consolidated. If people’s desires are always kept in mind anything we do, victory will certainly be ours. Since people support is essential for us, we must work together with the people and their desires must be valued, respected and implemented.

As provided in the NCA, the constitution would be amended and a Federal Union would be established in accordance with the Union Accord, the seven-step roadmap of the NCA must be implemented orderly and step by step.

I would like to say that in implementing the NCA, the negotiation teams should conduct the dialogues in ways that are not bias against anyone among the groups and compromises are acceptable to those concerned.

Since the 2020 elections could more or less one way or another might have impact on the peace process, mindful thought should be given and special care should be taken when doing certain things concerning the peace process during those periods.

When engaging in peace negotiations and political dialogues, it is necessary to silence the noises of bomb shells and gun fires. It is important not to be like “holding fire in one hand and a cup of water in the other hand”, as a saying goes.

If there is a will, it is natural that things made by human beings could be amended, removed, created a new.

The current attempt to amend the 2008 constitution in the Parliaments and our efforts to amend the constitution should be aligned with the NCA provisions. It should be handled with care and avoid being extreme, neither slack nor rigid, like tuning strings of a harp.

Finally, I would like to urge all of us to stand firmly, as the promises we have made in NCA, and concertedly make efforts to work for not only own benefits but for all the peoples of Union, and conclude my speech here. Thank you!